The key to your sleep

Melatonin: The key to your sleep.

Melatonin is a sleep hormone that is produced naturally by the pineal gland of the brain (epiphysis) and the retina. It occurs in the same molecular form in a wide variety of organisms such as animals, plants, insects and bacteria. Melatonin is involved in various physiological functions such as drowsiness, sleep-wake rhythm, circadian rhythm, regulation of blood pressure and activity of the immune system. The secretion of melatonin is inhibited during the day and stimulated at night. Maintaining this resynchronisation has a major impact on our health.

In the 1960s, melatonin was a particular focus of interest for the American Army to discover the secrets of hibernation in space. Shortly afterwards, a series of scientific researches found out that it has positive properties in terms of health. The beneficial effects of melatonin as an antioxidant, antidepressant or sleep disorder remedy are now well known.

Studies carried out in 2005 on people suffering from insomnia suggest that taking melatonin reduces the transition period between waking and sleep, thereby increasing the quality and duration of sleep (1). New studies suggest that melatonin supplementation is effective in children with sleep problems (2). In addition, melatonin seems to be able to relieve some of the disturbances in the sleep-wake cycle (Sundown syndrome) that are related to Alzheimer’s disease (3).

Numerous clinical trials carried out in 2002 concluded that melatonin reduces the effects of jet lag and could therefore be useful for travellers and airline pilots (4).

According to researchers from the CNRS, the Pasteur Institute of Lille and Imperial College London, there is a correlation between melatonin production and type 2 diabetes. Without melatonin, the disturbance of the day-night rhythm causes hyperglycaemia (increased glucose levels) and increases the risk of diabetes (5). This shift in rhythms also triggers abnormal insulin production and is associated with obesity.

Cell studies in animals and humans have shown that melatonin has significant anti-cancer properties. It can destroy different types of tumour cells or reduce their growth rate.

The spectacular results from the journal PLoS ONE of 15 June 2009 suggest that melatonin can slow down the effects of ageing. Within the Arago Laboratory (CNRS / Pierre et Marie Curie University), scientists have found that supplementation with melatonin reduces the appearance of the first signs of ageing in a small night mammal (house shrew) by 25% (6).

Melatonin production can be disrupted by late night sleep, stress situations, irregular sleeping patterns and electromagnetic waves (artificial lighting, antenna relays, microwaves, power lines, mobile phones, etc.). People with heart disease have low melatonin levels, so it remains open whether this is a cause or a consequence. The therapeutic properties of melatonin are very important because all our functions (e.g. immune system, cardiovascular system, etc.) are organised in time and many disorders result from a desynchronisation of biological rhythms. This is especially true during the ageing process.

In order to avoid any possibility of contamination by extracts from the animal pineal glands, our supplementation from melatonin has been 100% synthesised in the laboratory. According to various studies, numerous plants (kudzu, feverfew, St. John’s wort) and especially nuts (7) provide a significant amount of melatonin.

According to the latest research, melatonin is a powerful painkiller with morphine-like effects. Melatonin, which is also called the “sleep hormone”, is mainly used to treat problems in falling asleep. It is also believed to play an important role in the treatment of chronic pain, which is particularly difficult to bear.

How does it work? Melatonin increases the production of peptides, which are completely identical to natural opiates. These peptides block the pain impulses in the brain, but also in the spinal cord. In this way, they increase the body’s tolerance to pain. In summary, taking 3 mg of melatonin 30 minutes before bedtime can reduce the consumption of prescription painkillers and thus reduce the risk of addiction.

Be the first to review “Melatonin (3mg)” Cancel reply 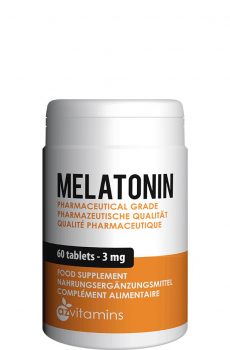