Product Description:
Chrome is an essential cofactor for insulin, which regulates the fat protein metabolism and carbohydrates. 1982, United States Department of Agriculture (USDA), had discovered and patented a biologic form of active chrome, called picolinate.

An extensive research, which results have been published in scientific magazines, show the positive effects of a daily supplement of 200 mcg Chromium Picolinate:
• Natural remedy for Cholesterol LDL and Triglycerides.
• Decreases the LDL Cholesterol (bad) and increases HDL Cholesterol (bon).
• Prevents or reverses Type II diabetes.
• Balances fat and forms the muscles.
• Helps burn fat and increases the muscles even without exercises.
• 90% of the population do not have enough Chrome in their diet.

A study by Dr. Kaats and Blum, on 154 slightly obese people (20% to 25% over the normal weight), has demonstrated that after a daily intake of 200 to 400 mcg Chromium Picolinate, without changing any habits, and this during 72 days, these people have lost in average 2 kg of fat, compared to just 300 gr for the group absorbing placebos.
A blind experiment study directed by Dr Schneider, targeting moderate obese diabetic people, more resistant to insulin, show a very sensitive reduction in controlling the glucoses. Chromium Picolinate is not dangerous. Clinical studies have revealed no side effects after a daily intake of 200 to 400 mcg. 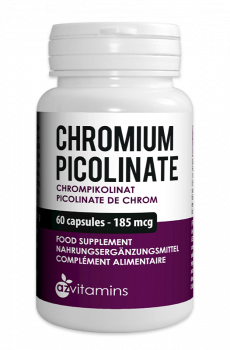